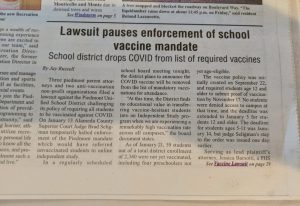 First, Honorable Judge Seligman granted FLTJ’s emergency application to stop Piedmont Unified School District’s unconstitutional, illegal, unethical, immoral and potentially lethal COVID-19 vaccine requirement for children five years old and up with zero independent study alternative. Then, staring into the jaws of Defeat, the District voted this week to withdraw its COVID-19 vaccine requirement in its entirety and is begging us to dismiss our lawsuit! Piedmont was the only school district in the state of California mandating vaccines for children as young as five, which they decided while laughing at parents during public meetings while they plead for them to reconsider and to put their children’s health, safety, education, and future, first.

Make no mistake: this is another major Victory for our Movement.  The house of cards is crashing, as we prepare to battle Legislative bills (see SB866 and SB871) similarly seeking to mandate unauthorized medical products on babies as young as in daycare in order for them to receive critical in-person services, and to allow our minor children to consent to them without us knowing.

We will not back down and we will not stop.  This is the Hill.  If we let them take one more inch for one more minute, we will be that much further from the Victory that is legally and morally ours.

Major accolades to FLTJ Law Partner Rita Barnett-Rose, whose critical filing revealed to Judge Seligman how egregious the District’s plan was and moved him to grant our request for a stay “on the papers, alone,” before even hearing oral arguments, and to FLTJ Law Partner Jessica Barsotti, who destroyed opposing counsel’s attempts to undo the ruling during argument.

The tyrants mandating these dangerous medical products are losing ground fast.  We are triumphing!  Keep fighting the Good Fight and see you on the Hill!