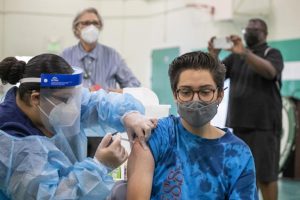 On Tuesday, July 5, the absolute last day for Judge Beckloff to issue his final ruling on the Writ Petition of Aannestad Andelin & Corn, LLP in their lawsuit, G.F. v. Los Angeles Unified School District case, he did. And he did a complete 180. In his 9 page decision, Judge Beckloff not only reversed himself on his tentative (initial) ruling in AAC’s case, but on his final rulings in both of our preliminary injunction cases.

Recall that for months – ten (10), to be exact – we have been shouting from the rooftops that neither LAUSD, nor any of the over 1,000 school districts in the state of California, have the right to add new vaccine (medicine) requirements to the current required list of 10 (see Health & Safety Code, section 120335). We have argued that, even if it did, it could not – essentially – expel children for being unable or refusing to comply with the requirement, for medical, personal, or other reasons; force them into an independent study program; or fail to provide medical and personal beliefs exemptions. (See Health & Safety Code, section 120338). We argued that allowing LAUSD – and, in turn, every other of the 1,000+ districts in the state – to implement vaccine requirements at whim, even those that “supplemented” or “complimented” the California Department of Health’s required 10, conflicted with and was preempted by a complex statutory scheme of over 155 Health & Safety Code sections drafted by the Legislature that “fully occupied the field” of school immunization requirements, and granted the CDPH the exclusive authority to operate in this field. We have argued that the purpose of the these exhaustive Health & Safety Code sections was to ensure a comprehensive framework for achieving “total immunization of appropriate age groups” against 10 childhood diseases, as well as other diseases deemed appropriate by the CDPH, and to avoid a “patchwork” of inconsistent immunization requirements up and down the state that would lead to “dangerous” pockets of unvaccinated students in school districts of their choosing. (See Health & Safety Code, section 120325 (a)). We have argued that allowing LAUSD (and every other district) the authority to require new vaccines (medicine) without any notice, public participation or opportunity to be heard, or compliance with the Administrative Procedures Act or Legislative process would allow school districts to change requirements for new or continued access to critical in-person educational services and resources without due process of law, and in violation of our childcare’s constitutional right to an education. We have argued it all.

But Beckloff would not be persuaded. He claimed that California school district’s have “broad discretion” to implement whatever policies and procedures they saw fit to protect the “health and safety” of their communities; children were not being forced to get the vaccines, they had the “choice” whether or not to do so (or to chew off their arm or or their leg); LAUSD was not excluding students by placing them in their sub-par, already-failing, reason-for-the-mandate-to-begin-with independent study program, it was simply “placing” them at different locations according to their race, er, I mean, vaccination status; LAUSD did not conflict with the Health & Safety Code, it “complimented” it; and various other mental gymnastics to avoid the ultimate finding that school districts do not have the authority, expertise, or right to dictate which medicines – if any – children must consume in order to attend school and receive on-campus services in-person.

For the last 10 months, we have all been holding the line and pushing back on these illegal mandates together. While AAC and their clients bravely held the line, patiently waiting for their Writ Petition to be heard, we – on behalf of our clients Protection of the Educational Rights of Kids and Children’s Health Defense, California Chapter – have been mounting an aggressive offense, battling LAUSD to stave off as many harms and protect as many children as possible. Immediately. We went to court not once, but three times, to push back the mandates and were successful in not only pushing enforcement back until Fall 2022 and then, again, to July 2022, but to force the District to concede that it must and will align with state law. This announcement was made less than 48 hours after Beckloff granted our request to deny LAUSD’s frivolous, bad-faith attempt to dismiss our lawsuit. In January, we completely struck down Piedmont Unified School District’s illegal mandate on children 5 and up with no independent study option, a finalruling (no appeal) that caused Oakland Unified to withdraw its mandate, and likely inspired hundreds of other school districts to do the same. You have showed up to board meetings, rallies, your child’s school, the Capitol and defeated 9 out of 14 Bad Bills, with the last 5 about to fall.

All this is not to mention the wins in silent battles we have been waging against LAUSD to obtain copies of every piece of evidence it claims to have to justify its illegal, deadly, unscientific actions so that we can crack the entire criminal enterprise open. The depositions of their “experts” that are taking place in 2 weeks. The Motions to Compel that are looming. The hearings we have been winning behind closed doors. The Resolutions you have helped craft and pass. The Board members you have recalled, the members you are queuing up to replace them. The Armies you have built up, educated, and trained. And the tens of thousands of hours you have spent rising up.

We have been winning this whole time. Piece by piece, we have been dismantling this horrific, massive war machine.

“But Nicole, Nicole, Nicole. What is your legal analysis of all of this? How did this happen? And why now?” That – above – is it. The writing was on the wall (literally and figuratively). The house of cards is falling. We are doing everything we set out to do – cracking the foundation, confronting our oppressive “leaders,” attacking this from bottom up and top down – and there was nowhere left to turn to than in the Truth.

We are so grateful for our colleagues at Aannestad Andelin & Corn LLP and their client G.F. and D.F. (anonymous minor plaintiff and his father) for bravely filing this lawsuit when no one else would even put their initials on it. We are so thankful to all of you who have constantly shown up, rallied, advocated, and just said “No” when needed to. We will be forever indebted to all of you who have done the work and supported us in ours. There is absolutely no way that this ruling could have come about without each and every one of you. All of our efforts together. Everything described above.

Which is why we will never stop fighting for you.

All it takes is someone, just one person to rise up and just say… “No. Enough”

And we pray that – with our work – that next person is you.