WHO WILL HELP US? 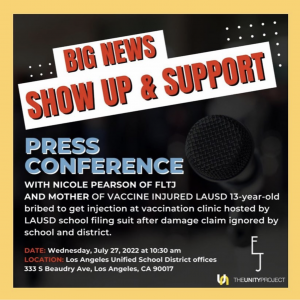 WE HAVE A LOT TO TALK ABOUT:

To hear what is really going on.  Our client, Maribel Duarte, and her son, Moises, have been navigating alone, without any resources or support from the school or District that harmed them, the horrifying reality of Moises, 13, being vaccinated against his mother’s consent or pediatrician’s recommendation, at a “pizza party” / vaccination clinic hosted by Los Angeles Unified School District school Barack Obama Global Preparation Academy.  Enticed by free food, lured by trusted adults charged with his care, and pressured by peers to “just get vaccinated,” with the undeniable urge to fit in, stop being harassed about his private medical conditions and personal health information, and “be normal,” Moises succumbed to the perfect storm of fraud, coercion, and undue influence that is the current California legislative, political, medical and educational world.  Despite Moises being unquestionably vaccinated at the school vaccination clinic, the District and school have ignored Moises’s and his mother’s pleas for assistance.  As a result, it is now up to the Duarte family, with the help of their attorneys at FACTS LAW TRUTH JUSTICE, to fight for the support and dignity they deserve.

WHO WHAT WHEN WHERE:

MOISES IS NOT ALONE.

Already – even without Assemblyman Rudy Salas’s Assembly Bill 1940 turning schools into “School-Based Health Centers;” Senator Wiener’s illegal Senate Bill 866 reducing the age of consent to vaccines to 12 (at that time); Senator Josh Becker’s Senate Bill 1419 allowing children to seal their medical records where they receive treatment without their parents’ knowledge or consent; Assemblywoman Akilah Weber’s Assembly Bill 1797 mandatory, state-sponsored digital database; Senator Pan’s Senate Bill 1497 mandatory CV19 and “other communicable and infectious deists” testing; Assemblyman Evan Low’s Assembly Bill 2098 muzzling doctors who do not treat in accordance with the prevailing CDC-FDA narrative – tens of thousands of California children are being targeted, marginalized, and harmed by these, and other, dangerous “equitable” policies, while their parents are being systematically excluded from their child’s healthcare and well-being, while simultaneously being set up to take all the liability when it goes wrong.