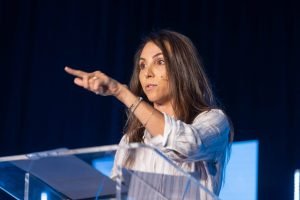 Yesterday Italy elected its first female Prime Minister, who values traditional, conservative values (high-level summary). Her election is controversial, to say the least, and I am not educated or familiar enough with her, myself, to opine about the benefits of it (and, in fact, have many questions of my own that I must answer before I do), but right now, the main point of her Victory is two-fold:

(1) the masses are awake and (2) the War has finally been declared publicly in the mainstream.

As regular followers of our work, you have – seemingly – known about what Giorgia succinctly, powerfully, and directly proclaimed and have been awake to it for a while. But upon reading comments, as well as posts from colleagues in this Fight, I have begun to question this and wonder… “Are they REALLY awake?” Because the comments resonate in debates between Left v. Right, Donald v. Joe, Republicans v. Democrats, Christianity, tradition, heterosexuality, and nothing in-between, and have completely forgotten the most significant Lesson of the Last Two Years:

This is a massive, GLOBAL conspiracy perpetrated on every single one of us by EVERY single one of them, black, white, red, brown, Democrat, Republican, conservative, liberal, alt-right, alt-left, Christian, Islamic, Jewish, ALL of them.

You have also forgotten the other critical – and almost if not more important – Lesson:

The Power is within each and every single one of us to Win this War.

How do I know? Because of this. Because every government We, the People, have flipped, every Bad Bill we have killed, every bad representative we have recalled, and every motion, hearing, and lawsuit your FLTJ Warriors and their colleagues win proves that #TheLawIsOnYourSide…. if you exercise it.

So now what? If this is all really true, then how do we actually win this War?

You stop looking for Heroes to swoop in and save you and start looking within yourself to take back, secure and exercise what is rightfully yours.

We will be here for you every step of the way, as long as you are true to yourself, link arms with us, and #RiseUp with us. The choice is yours. #TheTideHasTurned #NowIsTheTime to #RISEUP.