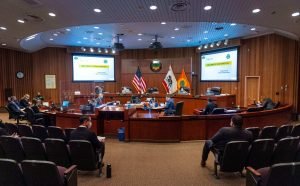 Your FLTJ Warriors are at it, again, this time with the help of all of our friends, and their clients, Peggy Hall and Children’s Health Defense, California Chapter. As you know, we have been pressing on the County of Orange – in person at hundreds of Board of Supervisor meetings, as well as in court – to end their unconstitutional, illegal, unscientific and, quite frankly, cruel declarations of “local health” and “local emergency” made in response to COVID-19, which they have maintained since February 26, 2020.

After months and months of delays and fighting with the County’s and Board’s attorneys to go to Court to debate the merits of our case – whether or not the County and Board has a duty to (1) review local Orange County conditions to determine whether or not these warrant declarations of local and/or local health emergency (hereinafter collectively “local emergencies”) and/or (2) terminate either emergency the soonest date possible conditions warrant. (Please read our Petition here – we finally went toe to toe (well, we were there with our toes, they were hiding behind their cameras) at a hearing before Honorable Judge Lee on September 21.

The purpose of the hearing was two-fold:

Every single one of these Board members needs to be recalled (at minimum) and certainly replaced at the next election.

For over an hour we debated opposing counsel who – in a last-ditch, improper, and desperate maneuver – did a completely 180 on their position and claimed that they never denied their clients do not have the duty to review conditions or terminate either local emergencies if said conditions warrant. Rather, their clients have those duties, but those duties can be carried out in secret behind closed doors without any public input, and the County and Board has been reviewing local conditions and consistently voting to maintain the declarations of local emergencies (!!!!). Having never heard these arguments before, your FLTJ Warriors had to pivot on a dime to respond to and defeat each claim. More importantly than this, however, was Honorable Judge Lee’s ability – and willingness – to do the same, which he did by questioning a flustered opposing counsel with patience, a willingness to hear, and intellectual integrity.

At the end of the hearing, Judge Lee decided to take his 21 page tentative ruling under submission to take into consideration all of the never-before-heard arguments by counsel. Thereafter, after considering it the whole weekend..

Judge Lee converted his tentative ruling into a final ruling, summarily denying Respondents’ attempts to dismiss our suit, and granting our request that the County and Board be ordered to review conditions and terminate the local emergencies if conditions warrant, or show cause why they do not have to.

Because Respondents’ counsel raised novel arguments that the County and Board have actually been fulfilling their statutory obligations and duties to review conditions and extend (or not terminate) the local emergencies, Judge Lee ordered the parties back to court on December 1, 2022 at 1:30 p.m. to allow them to prove this. We will, of course, be prepared to and will attend this hearing to continue to protect your rights as individuals and residents of Orange County. We hope you will attend, as well, to do the same.

This is a major, major victory for our movement.

No other case has gotten this far but, again, more importantly that this, no other judge has been courageous enough to be willing to read the law and interpret it for what is says on its face, or to challenge his own employer to his potential detriment. [As an aside, we need to specifically pray for Judge Lee and his courageous upholding of his civic and professional duties and his oath to administer justice without respect to persons, and do equal right to the poor and to the rich, and impartially discharge and perform all his duties.] We are on the precipice of seeing the “evidence” and processes that our government has relied upon (if any) to deny us all access to basic, human needs and fundamental rights, and – more importantly – to restoring the Rule of Law, regardless of emergency status. We are prepared to take this all the way to hold our elected representatives accountable to statutory, professional, and ethical duties as the purported gatekeepers to a free and orderly society. We hope to see you there alongside us.

NEVER GIVE UP + CONTINUE TO RISE!

Yours in the Fight,
FLTJ