The Medical Noose Is Strung 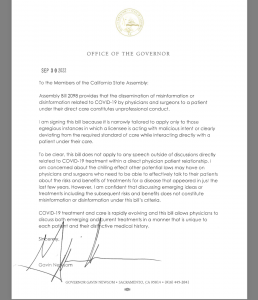 On September 30, 2022, despite the ardent pleas of millions of doctors, nurses, medical providers, lawyers, and concerned patients – and constituents – throughout the state, Governor Newsom signed Assemblyman Evan Low’s bill – Assembly Bill 2098 – into law. Fondly referred to by FLTJ as “the medical noose,” Assembly Bill 2098 as law will stifle honest, open discussions between medical professionals and their patients and drive out innovative, forward-thinking and thoughtful providers and scientists from the state by making the dissemination of “mis” or “disinformation” relating to COVID-19 “unprofessional conduct” subject to investigation and penalty, up to and including suspension and revocation of their medical licenses.

The Bill defines “mis” and “disinformation” as information relating to “the nature and risks of the virus, its prevention and treatment, and the development, safety, and effectiveness of COVID-19 vaccines” that is “false” or “contradicted by contemporary scientific consensus contrary to the standard of care,” or is “disseminated with malicious intent or an intent to mislead.” Pursuant to the terms of the bill, covered communications will include those between the provider and patient “in the form of treatment or advice.”

While opponents objected to AB 2098 on the grounds of over-breadth and First Amendment violations, fearing the bill would bar the rigorous public debate necessary to keep science and medicine advancing and improving, Governor Newsom attempted to quell these concerns in his official statement announcing his signing of the bill:

I am signing this bill because it is narrowly tailored to apply only to those egregious instances in which a licensee
is acting with malicious intent or clearly deviating from the required standard of care while interacting directly
with a patient under their care . . . To be clear, this bill does not apply to any speech outside of discussions
directly related to COVID-19 treatment within a direct physician patient relationship . . . I am confident that
discussing emerging ideas or treatments including the subsequent risks and benefits does not constitute
misinformation or disinformation under this bill’s criteria.”  [Emphasis added].

In other words, the bill will only apply to private discussions between physicians and surgeons and their patients relating to their individualized, private medical treatment and care. HOW is this better? This is exACTLY the kind of information that should be permitted. The PUBLIC and WIDESPREAD of FALSE information (whatever “false” means (see below)) is the type that should be prevented, not private one-on-one discussions between patients and their providers involving the patient’s personal symptoms, medical history, preferences and needs.
Also, define “false” and “standard of care” when we are dealing with a novel, (presumably) never-before-seen virus and the recommended course of care turns on a dime… and OVERNIGHT?  What’s even worse: what happens when those purportedly “false” private recommendations – based exclusively on a specific patient’s medical conditions, wants and needs – later turn out to be TRUE? To be nothing but explicitly clear: there is no “standard of care,” “mis” or “disinformation” in the context of a novel virus. Therefore, there is no way to gauge or define violative “misconduct” and, even if there was, who is going to define it?? The very same authorities who keep changing it?!
Even more than this (if you can believe it), the signing of Assembly Bill 2098 is not just a crippling blow to the scientific and medical communities, but to all American’s fundamental rights, in general, but, specifically, to free speech. Gruesome has declared and outright war on each and everyone one of your fundamental rights and basic human needs whenever there is a “state of emergency” (and beyond), and signaled to all of us that he has zero intention of upholding or protecting the U.S. or California Constitution, whether as governor or POTUS. Listen here to FLTJ Partner, Nicole Pearson’s press conference statement and subsequent interview regarding what Gruesollini’s signing of this bill means, and where we go from here.
RISE UP.