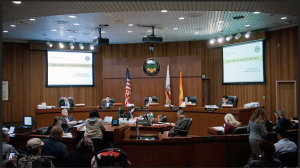 They’re resetting the Table of Tyranny and you are rushing for a seat at the Head.

On Tuesday, November 1, the Los Angeles County Board of Supervisors unanimously passed a motion to start spreading panic about allegedly rising pediatric respiratory syncytial virus (RSV) cases, to direct the Department of Public Health to amplify messaging about the importance of childhood vaccination [shocker], and to direct that agency, in collaboration with the California Department of Health Services and private hospitals [aka a “public private partnership”] to monitor any stress on the system arising from pediatric RSV hospitalization rates and report back to the board within 60 days.

What does this mean?

The largest county in the United States is about to declare another state of emergency, bringing its total states of emergencies to three – COVID-19 and monkeypox still in effect – and its tyrannical grip on Angelean’s rights and freedoms even tighter.

On Wednesday, November 1, the Orange County Board of Supervisors – three of whom are Republicans – ratified Local Health Officer Dr. Regina Chinsio-Kwong’s declaration of an RSV state of emergency, and passed Dough Chaffey’s request that the Governor declare a state-wide state of emergency due to RSV “and other respiratory viruses” and to “suspend all applicable laws and regulations limiting hospitals and other health care facilities,” and “make all relevant funds available to the County of Orange” for no specified reason. This put’s OC’s states-of-emergency grand total at two, including COVID-19.

What is RSV? Should I be worried???

RSV was first discovered in 1956; we have lived with it for 66 years. Most infants become infected with RSV by the age of 2 with negligible symptoms. In fact, even the CDC describes it as follows:

So why are they doing this?!

Please. You know: They are setting in motion a new wave of pharma-media-CDC-bolstering virus hysteria to justify lockdowns, mask mandates, school closures, remote work, dying alone, drug-induced deaths, suicidal ideations, depression, anxiety, and death. Then, once Moderna’s new mRNA RSV shot is EUA authorized, which the FDA already “fast-tracked” in August of last year, it will be mandated for government workers, schoolchildren, and likely private sector employees whose employers and school administrators are still too dumb [I’m sorry, it is what it is at this point] to read the words on the page of the laws we have cited and provided them with time and again to understand that this (1) violates state and federal law, and (2) will result in massive liability to them, not the government, Moderna, or any other entity in the distribution chain.

Is any of this sounding familiar?

SO WHAT DO WE DO?

SHOW UP at the next Orange County Board of Supervisors meeting Tuesday, November 8, at 9 a.m. We know (some of you) just went November 1, but this is the first regularly-scheduled, official meeting we can show up to with notice to tell these five dictators you will not stand for any more dictatorial suspensions of the Law or your – or your children’s – Rights, and demand that they revoke all states of emergency (CV19 and RSV “and other respiratory illnesses”).

If they do not end the emergency Tuesday, be prepared to show up November 29 when they vote to “ratify” the ongoing emergency. Let’s get this done now.

This do or die for you, your children, your grandchildren, for every member of our society, and for every human on the planet who yearns for Freedom.

Either stand up for our constitutional democracy, now, or watch it disappear forever.