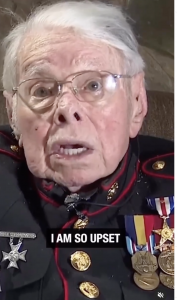 It’s wild to me that, especially today, people attempt to debate which country is the greatest in the World. The reason I put the emPHAsis on “debate” is because the sheer fact we have the Right + Ability to debate (or used to) is precisely what makes America the Greatest on the Planet. Not Freedom of Religion. Not Freedom of Press. Not Freedom of Assembly or even to Petition Your Government to redress your Grievances. Freedom of Speech.

Because without the ability to speak, we could not even identify, advocate, ascertain or exercise these other rights. This is, of course, my humble, personal opinion (and the topic of an upcoming FLTJ Blog Post / SUBSTACK: “WHAT RIGHTS DO WE HAVE?”).

So, I am sorry for your pain &

None of us who have not served in the military have 1/1,000,000,000th of an idea the pain and disappointment this man is suffering as he witnesses “fellow Americans” tear down, spit on, burn, and desecrate the Ideas + Freedoms + Opportunities he and his Brothers, without hesitation, laid their lives on the line for and, in many cases, laid down completely for people they did not even now. And, also in many cases, despite the desperate pleas from their own loved ones and friends that they not. I do not care what you feel about this country. The fact you even get to feel it, let alone blast it out to tens of thousands – if not millions – of people instantaneously in the stroke of a keypad, while millions of people worldwide are hung, stoned, beheaded, and murdered for so much as asking a question of their government, should be enough for you to realize how good we have it here. If you don’t, yet, then I suggest you look long and hard at what is going on in the rest of the World, and ask yourself, “WHAT IF….” If, after pondering that question you still come to the conclusion that this place is that horrible, please email info@FLTJllp.com so we can arrange a trip for you to Iran, Ukraine, China, Venezuela, Chile, Russia, Pakistan, Iraq, Canada, or Australia to help you answer this question with your own real-life datapoints, than my “over exaggerated, Q-a-Mom, conspiracy hysterics.”

Today we celebrate and honor you for your Patriotism + Selflessness + Willingness to sacrifice everything for the rest of us, no matter our race, religion, gender-identity, sexual orientation, political affiliation, ETC. All of us owe everything we have to you and your sacrifices have made it so that we have to give none in order to continue to enjoy them.

“To us in America, the reflections of Armistice Day [now Veterans Day] will be filled with solemn pride in the heroism of those who died in the country’s service and with gratitude for the victory, both because of the thing from which it has freed us and because of the opportunity it has given America to show her sympathy with peace and justice in the councils of the nations.”
— President Wilson, 1919

With Gratitude + Thanks,
Your FLTJ Warriors