$858B to Defense + 356.9% Budget Increase to the CDC: The Digital Medical-Military Industrial Complex Is Here 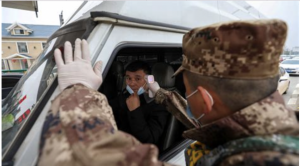 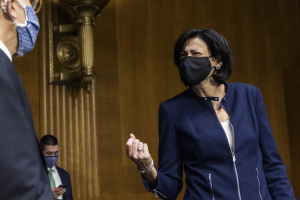 Yes, you just read those numbers correctly: $858B for military spending and an almost FOUR HUNDRED PERCENT INCREASE in annual spending for the Centers for Disease Control. I wonder what all of this could be used for?….

YES, much of it is going to be used: to stockpile weapons after U.S. munitions have been shipped to Ukraine; to launder money, e.g., $950M to Lockheed Martin, the nation’s largest military contractor, and $2B to Raytheon Technologies for missile systems; see also FTX / Ukraine / Election scheme; but what about the balance? Additionally, and/or more importantly, what about the 400% increase to the CDC?

The $1.7 trillion omnibus spending bill provides for more than $15M for administrative expenses for the Vaccine Injury Compensation Program Trust Fund, and $31M for “reimbursement of expenses of the Department of Justice for processing cases under the National Childhood Vaccine Injury Act of 1986. As you know from being loyal FLTJ Readers, the NVICP funds the National Vaccine Injury Compensation Program, which is designed to “compensate vaccine-related injury or death petitions for covered vaccines administered on or after October 1, 1988.” As you also know, the NVICP does not cover injuries or death from “countermeasures” – vaccinations, medications, devices, or other items recommended to diagnose, prevent or treat a declared pandemic, epidemic or security threat, such as Ebola, Smallpox (!!!), Zika, “Pandemic Influenza,” Anthrax, and  COVID-19 – but rather injuries and deaths relating to or arising out of the flu, MMR, DTap (Diphtheria, Tetanus, Pertussis [whooping cough]), HPV, pneumonia, and other [mandated] childhood vaccines. The Countermeasures Injury Compensation Program (CICP) covers injuries and death caused by countermeasures. [See this HRSA Comparison Chart for details.]

While $46M is alarming, it’s a nominal amount in the context of $1.7T and is not necessarily indicative of any prediction by the Federal “Government” of an excess of injuries or death resulting from or relating to the COVID-19 vaccines.

So… SHOW US THE MONEY!

Recall that in August 2022, CDC Director Rochelle Walensky announced the agency would undergo a major “reset” [pun intended, I’m sure] to address its failures managing the COVID-19 “public health emergency,” including the following changes she hoped would come by “early 2023” per an email to CDC staff :

Her announcement followed the CDC’s receipt of over $27B dollars and administration of over $56B dollars in grants to address COVID-19 from March 2020 through February 2022, which was in addition to the CDC’s typical annual budget of around $8B, must be approved by the Department of Health and Human Services secretary, Xavier Becerra, and is already receiving pushback. Thankfully, logically, many officials are skeptical of pouring more money into an agency that – by its own admission – underperformed and made serious errors that ruined the lives of millions of Americans. To that end, Libertarian think tank Brownstone Institute President, Jeffrey Tucker, who writes for the Epoch Times, suggests:

“A better solution would be to abolish the CDC. States can handle all of its responsibilities. It didn’t even exist until 1947. Its purpose was mosquito control, spraying a now-banned chemical (DDT) everywhere. These days, we handle that by going to Home Depot.

The CDC as an agency grew out of the 1944 Public Health Services Act that permitted nationally ordered quarantines for the first time. The legislative history of that thing remains a mystery to me. Regardless, it is nowhere justified in the U.S. Constitution. This act needs to go, too. So do all the federal agencies to which it gave rise. This is the only real solution.”

Note, the “rest announcement” also came just one month after another surprise announcement that HHS agency – the Administration for Strategic Preparedness and Response (ASPR) – would be given more power and responsibility in pandemic management than the CDC. Per a memo from ASPR Assistant Secretary Dawn O’Connell – who has degrees in literature (Vanderbilt) and law (Tulane) (not science or medicine) – and was appointed by the Senate in 2021:

“In recognition of the tremendous value this team brings to the Department and the American people—and due to the increasing size and scope of what we do—I asked [HHS] Secretary [Xavier] Becerra to consider making us an Operating Division and I am pleased to report that Secretary Becerra has made the critically important decision to elevate our team from a Staff Division to an Operating Division (OpDiv)[!].

“This change allows ASPR to mobilize a coordinated national response more quickly and stably during future disasters and emergencies while equipping us with greater hiring and contracting capabilities. As an OpDiv, we are now in the same category as other large HHS teams with core operational responsibilities such as CDC, NIH, FDA, CMS, and ACF. This change is an important next step for our organization which has continued to grow and evolve since its creation in 2006—the pace of which has quickened over the past year. This change is also a recognition of the good work you all have been and continue to do on behalf of the American People.”

SO, despite acknowledged failures, the three-to-four-fold increase in expenditures over the last almost-three years, and the fact that the White House is expanding pandemic response of ASPR, Joe’s FY2023 budget is going to increase the CDC’s budget from just under $9 billion dollars to $38.76 billion, a 356.9% increase relative to 2022. Which begs the question: is the Omnibus Bill the backdoor to such Congressional oversight and approval??? Shouldn’t we be abolishing the CDC, not expanding it?!

Are you seriously asking me this question? Have we learned nothing from the last 3 years??!?! If not, let me, STAND FOR HEALTH FREEDOM and the Congressional Research Service be clear:

“Coordinated national response”? “Adult immunizations”? “Future disasters and emergencies”? “Greater hiring and contracting capabilities”? “Global surveillance” ??Recall,the HHS and CDC already believe that “courts have recognized that while the requirements for probable cause and a warrant generally apply in a criminal context, these standards do not apply when the government is conducting a non-law-enforcement-related activity.” So, what will this unprecedented, unstudied, undebated expansion of federal power mean for our First, Third, Fourth, Fifth, Ninth and Tenth Amendment rights, as these “public health agencies” and unelected “public health officers” grow in strength and numbers despite spectacularly mismanaging America’s public health during a “pandemic”?

WE CANNOT LET THIS PASS: